I missed this story a week ago in the San Jose Mercury-News. According to its web site: “President Barack Obama…picked Adobe Systems co-founders Charles Geschke and John Warnock to receive…the National Medal of Technology and Innovation.”

According to the U.S. Patent & Trademark Office, “The National Medal of Technology and Innovation… is the highest honor for technological achievement bestowed by the President of the United States on America’s leading innovators.” Past winners include folks of the caliber of Carter Mead and Bob Metcalfe.  The awards will be bestowed on October 7 at a White House ceremony.

When you think about the history and development of digital publishing, no one can argue that John Warnock and Chuck Geschke are not the two most important players in transforming publishing into the extraordinary multiple media world we find it in today. Yes, Steve Jobs had the vision and the courage to create the hardware that would make Adobe’s innovations accessible, but PostScript was the basic ingredient that changed the whole palying field, as it formed the basis for digital type, Adobe Illustrator and later on, PDF. PostScript was invented by John Warnock and Chuck Geschke.

We credit the invention of the World Wide Web  to (Sir) Tim Berners-Lee, and correctly so. But I argue that without Adobe and Apple leading the world’s designers and publishers to move from analog processes and proprietary systems to fully embrace the digitization of text and images, the web would have been a non-starter.

My strongest congratulations to John and Chuck: the award is if anything overdue! You’ve both been heroes of mine for many years. 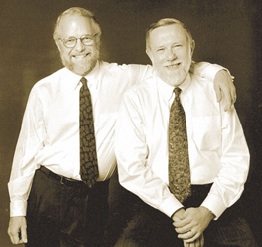