And now for something a little lighter…

According to The New York Observer, based on a report in Gawker, “(Penguin) management sent a memo out to staff yesterday warning them of ‘an insect issue in certain areas’ on several floors. Staff were instructed to vacate the building by 1 p.m. today and not return until Monday while pest control goes in and takes care of business.” 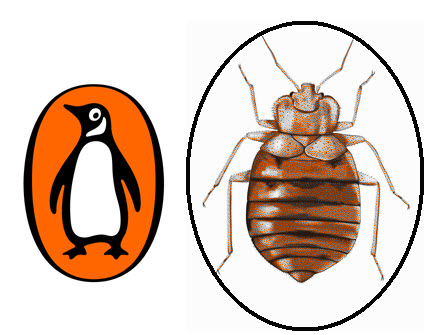 While the Gawker report is brief, the Observer takes another tack:

The obvious question to ask here is: what will become of all the books in the building? There are probably thousands of them! Are they all just going to have to get thrown away? Or microwaved!?

For answers, The Observerturned to a couple of bedbug experts: entomologist Louis Sorkin from the American Museum of Natural History and Jennifer Erdogan, the director of bedbug control services at New Jersey-based Bell Environmental Services.

Neither expert felt it very likely that the bedbugs would get into the books — “They don’t necessarily like books, especially,” said Mr. Sorkin — but it is a possibility.

After some discussion of the different techniques that might be employed to address the problem, including putting books wrapped in towls into the dryer, which was dismissed as impractical for the number of books in Penguin’s offices, the article concludes:

Should journalists and book critics be worried about opening Penguin packages in the next couple of days? Not really, but maybe, according to Ms. Erdogan.

“Bedbugs aren’t invisible, so you could see a bedbug on a book,” she said. “And again, likely a closed book that’s been on a shelf pressed against other books, it’s unlikely that the bugs could get inside. Is it possible? Yeah, there’s always a slim chance. I would advise whoever’s receiving them to be careful and inspect the packages.”

Or put them in the dryer “on high for a minimum of 20 minutes.”