I would imagine that the title of this blog entry will strike you as about as contradictory a title to yesterday’s entry as would be possible. But it’s pulled from the précis (registration required) of a new report from Borrell Associates, which has a strong reputation analysing all thngs Web. I thought I would rebalance my karma after yesterday’s posting.

Let’s start with the obligatory chart: 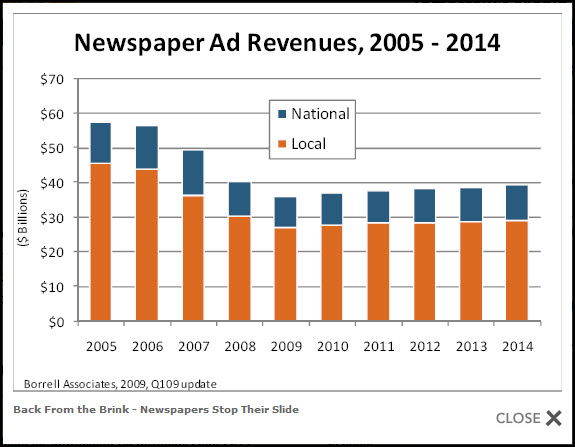 Now add some lively spice from the blog entry of CEO Gordon Borrell:

So here are our latest projections: Newspapers will be down this year, then they’ll start going back up. We expect a 2.4% rebound in newspaper advertising in 2010, and continued single-digit increases over the next several years. By 2014, newspaper ad revenues will be up about 8.7% over 2009 levels. While national newspaper advertising will do just fine, we foresee the greatest growth in local print – going from $8.9 billion this year to $10.1 billion, a 13.4% increase.

But there’s a caveat, a “dead-cat bounce”:

True, it all equates to more of a dead-cat bounce than anything else. And even at 2014 levels of just under $30 billion, newspaper advertising won’t be anything near the $55 billion we saw earlier this decade. Nor will it ever return to that level.

The fact is, newspapers reached their peak 91 years ago as two publishers battled over the presidency. On Nov. 2, 1920, in the first-ever radio news broadcast, KDKA delivered the results: Warren Harding beat James Cox. Electronic media was born, as was the business of writing obituaries for the newspaper industry…

The latest mediamorphosis of newspapers is almost complete. This once-fat, gray caterpillar that we knew as the “major daily newspaper” is turning into a smaller, more delicate, colorful local magazine, with fair prospects for growth. The smaller newspapers are firmly entrenched in their niche of providing rich local content that people seem to prefer in print – rather than screen – format. Our local newspaper, the Virginia Gazette in Williamsburg, is actually growing circulation and is thick with advertising supplements.

We may be dead wrong. The entire industry might die, and scores of papers might go belly-up over the next year. I’d like you to mark your calendar for today’s date, 2010, and see if that’s the case, or if we wound up being right.